This study investigates the cultural drivers of social entrepreneurship (SE), focusing on the way in which Global Leadership and Organizational Behaviour Effectiveness (GLOBE) affects social entrepreneurial activity (SEA) in different countries. The Global Entrepreneurship Monitor (GEM) and GLOBE project were used as data sources. Cultural values, regional affiliation, and economic development levels were used to cluster the selected countries. Correlations between values and operating SEA were checked for the entire sample, as well as for each of the three clusters. A positive correlation between ‘Gender Egalitarianism’ and narrowly defined operating SEA and negative correlation between ‘Uncertainty Avoidance’ and the aforementioned SEA was confirmed for all the countries, while the linkage between ‘Future Orientation’, ‘In-group Collectivism’, and operating SEA was partially verified. Research results suggest that culture is not sufficient to justify national differences in SE rates.

1. Further research should investigate on the impact of cultural dimensions on both the building blocks of SE, as well as on their relative balance.

New questions may include:
– How do different cultural values affect entrepreneurial and social orientation?
– How does culture affect the relative balance between self- and collective oriented interests in SE?
– How does the interactive effect among the cultural values act as trigger/moderator of SE?
– What combination of values is needed to sustain the growth and pace of SE?

2. In particular, institutional theory, a resource-based view, resource dependence theory, and theories of prosocial behaviour may be used to integrate cultural approaches in the study of SE. 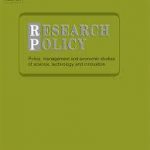 Even winners need to learn: How government entrepreneurship programs can support innovative ventures.Research 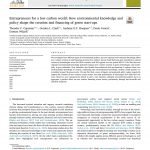 Entrepreneurs for a low carbon world: How environmental knowledge and policy shape the creation and financing of green start-ups.Research