2. Future research should be based on a larger sample in order to conduct more complete analyses of the tensions experienced by SEs in a certain socio-cultural context, clearly distinguishing between respondents from SEs de jure and de facto, and taking into account other countries

3. Further research could explore how the tensions are managed in more established/ mature SEs de jure and developing SEs de facto by case studies to make respective contribution to theory. 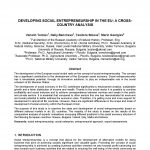 Developing social entrepreneurship in the EU: a cross-country analysis.Research 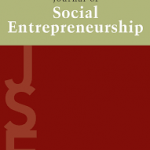