Although France has been a pioneer in the development of the concept of ‘social economy’, the term ‘social enterprise’ is less frequently used than in some other European countries.

Social enterprise and their eco-system: A European mapping report of France

The limited use of the notion of social enterprise in France can no doubt be linked to the particularity of the process of legitimisation, structuring and institutionalisation from which a new constellation, including forms of social enterprises – referred to as the social and solidarity economy (SSE) – emerged.

With the adoption of a framework law dedicated to SSE in 2014, France has given a legal ground to this term and has opted for a broad definition of SSE. Besides associations, cooperatives, mutual societies and foundations that are typically considered as the core of the social economy, the law, in its Article 1, opens up the field of the SSE to commercial companies, the purpose of whose economic activity is social utility (support to vulnerable persons, combating exclusion and inequalities, education in citizenship, sustainable development as defined in its Article 2) and whose management respects a set of conditions concerning in particular, but not exclusively, the limited redistribution of profits (reinvestment of a proportion of surpluses, more restrictive takeover conditions, etc.).

A similar trend can also be observed in Spain, where the social economy (with a long-standing process of institutionalisation) has progressively opened up to the notion of social enterprise, both formally via the national law and informally via the main representatives from the sector. 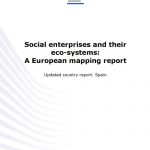 Social enterprise and their eco-system: A European mapping report of SpainSpotting Trends 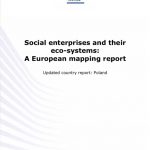 Social enterprise and their eco-system: A European mapping report of PolandSpotting Trends